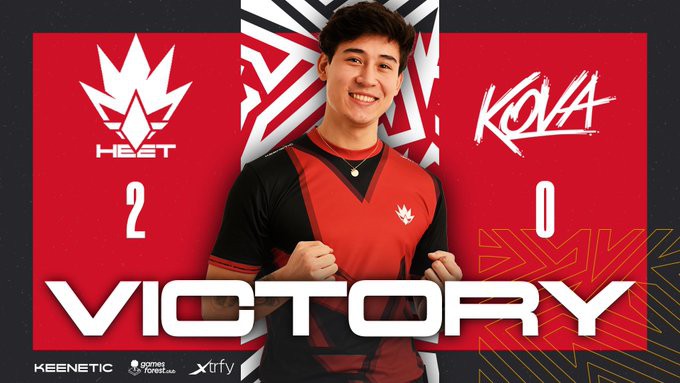 We faced KOVA and won the series 2-0 with one great team performance.

In Breeze, we started a little slow allowing KOVA to get a 4-0 lead, but after that, we were able to turn it around and convincingly won the map 13-7.

Everyone had a good game, but we have to highlight Kinguyen and Remoy amazing performances, that helped us take the series lead.

In Ascent, we were looking to secure the second win of the series and close it out 2-0.

We started the attacking side strong and managed to take an 8-4 lead into the second half.

Our defensive side on Ascent proved to be as strong as ever and we didn't drop one round in the second half closing the game 13-4 with another great team performance.

With this result, we secured our first win in the group stage, and with a dominant 2-0 which makes it even better.

Thanks for your amazing support, as always you guys made our opponents FeelTheHEET.

Our Valorant team will be back in action next week versus who cars? on Tuesday at 9:00 PM CEST, so be sure to tune in.